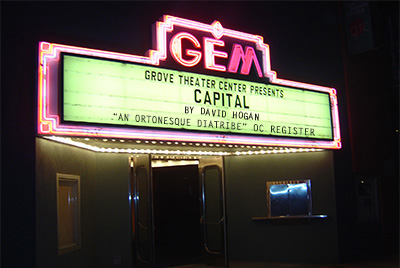 Premiered at the Grove Theater Center.

“A tart and vicious Ortonesque diatribe, aiming its arrows at several juicy targets at once.” -Orange County Register

NO SIT – NO STAND – NO LIE – tragicomedy

One man’s memories of tenderness and cruelty, romance and torture.

Opened the ‘Resilience of the Spirit’ Human Rights Festival in San Diego, California.

Winner of the Claire Donaldson Competition.

A play within a play (within a play) about the novelist Flann O’Brien who, at the age of 29, gives birth to two fully grown children: The Irish Times columnist, Myles na gCopaleen and the civil servant, Brian O’Nolan.

Six ambitious young people are engaged in illegal genetic manipulation experiments on a remote island in the South Pacific.  When sexual and other personal politics preclude their ability to work together, they believe they’ve found the solution in Margaret Mead’s classic book, Coming of Age in Samoa.

The other way to meet.

Premiered at the New Play Cafe.