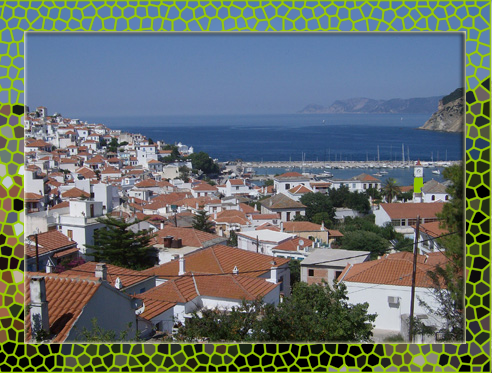 On a Sunday morning in the large amphitheater of my Greek Island village, the male voices of the psaltis from three distinct churches could be heard concurrently.  In the Carnegie Hall-like acoustics of the village, their unamplified chants arrived at nearly the same tone and volume to the house, located high on the village curve.  The effect, however, made the timeless medieval melodies discordant and jarring.

But there were rewards for the patient xenos eavesdropping from above.  If you listened long enough, there came times when the trinity of chanted prayers harmonized unexpectedly and melded into something more sublime and beautiful than any single one of them could have been.

And I thought, there it is in a song: the history of this island, a place where fishermen, cooks, wives, builders and farmers lived together for 5,000 years, sometimes in competition, sometimes in harmony, but almost always in an unenforced and organic equality.  They ate and drank with each other, bought and sold from each other, and married each other.  Their lives were limited, perhaps, but contentedly circumscribed.**  But that was before the European Union and, later, Hollywood discovered the island, before the drachma became the Euro, before the new port and trawl nets and so many pale tourists with fat pockets.

There aren’t enough fish anymore; the few small fishing boats that remain are largely ornamental.  Successful tavernas swallow their less sophisticated rivals, bringing in food and even fish — fish! — from the outside.  Rooms that were once rented by local families have given way to hotels.  In short, the interdependence of the villagers is gone.  A few grow rich, while others, having lost their livelihoods, go to work for them.  It is what we in the restless West understand as the way of the world — almost without thinking about it.  And it is what many call progress — again, almost without thinking about it.

I’ve been coming every summer for over 20 years and have seen the changes in snapshots.  The hope is that one day the tide will, somehow, rise in the tide-less Aegean and lift all boats — but so far that isn’t the case.

So far, the changes have made the villagers like those discordant psaltis on Sunday mornings.  They compete with each other in way they didn’t have to previously, knowing that in the future there will be a few amplified winners and many more losers.  And the not-so-small miracle of the resounding harmony that was this island for 5,000 years will be lost forever.

** I suppose I could be accused here of romanticizing village life from a safe distance — but I take my lead from two novelists, Leo Tolstoy and Nikos Kazantzakis, who both concluded that the so-called simple villager lives a full life and knows all one ever needs  to know.

You can buy ‘THE LAST ISLAND’ here.

2 thoughts on “Sunday Morning Comin’ Down (in Greece)”