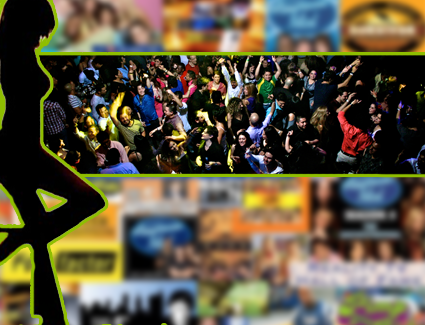 There’s a half-naked woman in the corner, and she’s screaming at a short man with a monkey on his shoulder.  A crowd is closing in around them, and it’s hard to turn away for any number of reasons — three of which are the partial nudity, potential violence and an angry monkey.

But you manage to do so.

The place is packed.

Someone hands you a plastic cup overflowing with a peach-smelling blue liquid.  “What’s in it?” you ask but can’t hear the answer over the three (or is it four?) songs blasting from three (or is four?) different directions.

You step onto the rear balcony of the house and consider dumping the blue liquid into a tall hedge, but curiosity wins and you take a small sip.  It tastes exactly like it looks: syrupy and strong.  You almost gag.

In the backyard pool, a younger crowd of skateboarders whirl around.  One of them slams his head on the concrete edge of the deep end.  He’s dazed, bleeding and smiling.

Behind the pool, a half dozen people are roller dancing.  Jive Talkin’ by the Bee Gees is playing, and their roller skates are old-style, and it’s like you’re peering into a time warp.

You wonder what was in that blue liquid.

“This is crazy!” you hear from the house.  You turn back to find everyone and everything clamoring for your attention.

Every corner seems to hold something shocking or titillating or disgusting or funny.

But that’s when you see her… leaning against the bookshelf in a small side-room.  She’s silent, remarkably so in this environment, and old fashioned, if in a novel sort of way.  Though she’s entirely self-contained, you feel as if she might have something to tell you.

This woman isn’t going to come to you; you know that much.  You’ll have to go to her.

You might miss something at the party for one thing.  (A chair has just flown overhead, and there’s a rumor that a ferret is loose.)  And she could be dull or crazy or pompous or bitterly sarcastic.  She might have a hyper-jealous, steroid-raging boyfriend chugging gallons of blue liquid.

But you know something else as well — unlike any other person or thing at the party, she might possibly, just possibly, change your life.

You can buy ‘THE LAST ISLAND’ here.

One thought on “The Prettiest Novel at the Party”